There is Fiber Everywhere

Fiber is being installed a quite the rate right now. I spoke with the CFO of Lumos at Comptel. (He was one of my 20 interviews for Comptel TV). Lumos has a dense fiber network.

"Lumos Networks is a fiber-based provider in the Mid-Atlantic region serving Carrier and Enterprise customers offering end to end connectivity in 23 markets in Virginia, Pennsylvania, West Virginia, Maryland, Ohio and Kentucky. With a fiber network of 7,467 fiber route miles, Lumos Networks connects to 633 Fiber to the Cell sites, 13 data centers and approximately 1,400 on-net buildings. In 2013, Lumos Networks generated over $104 million in Data Revenue over its fiber network." [CEO interview]

The headlines below are just a piece of what is going on. Lumos, C Spire, Google Fiber, Socket, Sonic and so many more CLECs are building out Fiber to the Premise. In some cases, the premise is a home; in others a business or a multi-tenant building, an office park or an office building.

Fatbeam and Lumos mentioned using all of the technology available to bring broadband to under-served markets. That includes fiber, but also fixed wireless, licensed spectrum, hybrid cable/coax and satellite.

More often today, it is fiber, but most CLECs told me a story about building out with an anchor tenant. No more building on spec (or build it and they will come). Google Fiber explained how they get 80% signed up before they even begin construction of a FiberHood. Fatbeam and Lumos use schools and medical facilities as anchor tenants. TDS has a CLEC division that uses muni government for its fiber anchors. Admittedly, much of the fiber is for cell towers for almost all of the players. 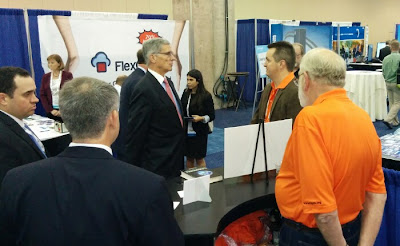 
The other big news was that Comptel had reached 188 members. I don't find that reassuring. FISPA has about 130 members. Comptel isn't much bigger. They should have over 300 members considering that they have billing & tax companies like BillSOft (now called EZtax), law firms, VADs like VARDATA and Walker & Associates, the I+C-LECs (Windstream, TDS), cloud folks, NTCA, EarthLink, XO, Google, and the core companies (Neustar and iconectiv).

I have often been tough on Comptel for things it wasn't doing - like the Ethernet exchange or the SIP Peering hub or any volume buying (like FISPA and the Agent Alliance). It is mostly an advocacy group. And to do that well you need 2 things: lots of members (voices) and money. In the last year, Comptel hired former Congressman Chip Pickering to be the CEO and, following the industry path, hired some folks from DC to join them, including Angie Kronenberg from the FCC.

And then there are those that just aren't helping the Digital Divide at all - like say this one.