The Battle for TV Subs

Some of you may have heard about the Charter bid for TWC being rejected (again). Or that the DC Circuit court ruled with Verizon against the FCC like it did in 2010 in siding with Comcast. Net Neutrality is officially dead. TechDirt has a good look at NN.

Some interesting numbers came out recently. 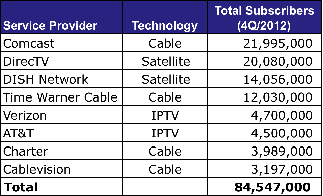 
Mudge: "The pay-TV market is shrinking. It's a slow shrinkage. The video offering, at this point, is not how you keep and hold the home." I think I have been saying that for a while. Cord cutting is hitting the cable companies to the tune of -3% per quarter for Comcast, TWC, Charter, Cablevision. DISH is losing to DirecTV. ATT, VZ have TV subscriber net adds. Five years ago, cable was making about $10 per TV subscriber. It's unclear what it is today.

One thing to note is that cable cowboy John Malone, chairman of Liberty Media, bought a 27% stake in Charter for $2.6B in order to consolidate the cable companies. Malone is urging Charlie Engen at DISH to merge with DTV. Consolidation is needed for 2 reasons: negotiation power with content companies and operating efficiencies. I think the efficiency thing is a joke. It never happens and it crushes both brand and employee morale. Negotiation power is over. CBS proved it by making TWC cable bend in 2013.

Subscribers dropped both TWC and DirecTV in 2013 over channel black-out/disputes, but both saw revenue growth despite subscriber losses!!!