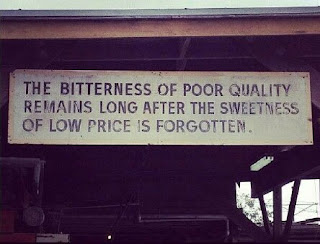 If you think you can sell on price, think again.

You don't have the access to cash or the cash flow to keep up with the big guys as they literally give away service for pennies.

It's a well known fact that cableco are swiping up market share by being the low cost pipe. Now they have business TV as an enticement too. Any business with a lobby is switching to cable for Internet, phone and TV. The triple-play strikes again.

Meanwhile the fiber guys - especially Level3 - need to put revenue on the books. They are doing it by charging pennies per MB. I have seen deals for 1GB with prices for 100MB. With no build-out cost to lit buildings, this will be the fastest way to take deals off the street and keep the fiber in use. But at what a cost?

Even ATT is in the game with a promo rate of $1786 for 100MB including loop (EaMIS). Granted, like all things ATT, this one has more qualifications than a beauty pageant.

It's no wonder that the CLEC's are turning to other services. CLEC's lack metro fiber assets, a cellular network, and the copper plant is retiring. That means managed services and cloud - and eventually that will will mean OTT (over-the-top). We'll see how that works out.