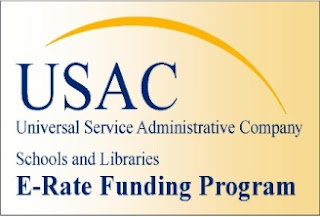 The FCC released the funding year 2009 Eligible Services List (ESL) for the schools and libraries universal service support mechanism (commonly known as E-rate) pursuant to section 54.522 of the Commission’s rules. On July 31, 2008, the Commission released a public notice seeking comment on the ESL proposed by the universal service fund’s administrator, the Universal Service Administrative Company (USAC), for funding year 2009, as required by section 54.522. The FCC declined to adopt any of the changes to the ESL proposed by USAC. As such, the funding year 2009 ESL we release today is the same as the funding year 2008 ESL. The list of Eligible Services for E-Rate runs about 48 pages. Read it here in text [PDF]