Nestled in a FastCompany article about the nasty antics that TimeWarner Cable (TWC)* pulled in North Carolina to stone wall a municipal fiber network is a chart about the available broadband pricing and speeds in the Triangle. 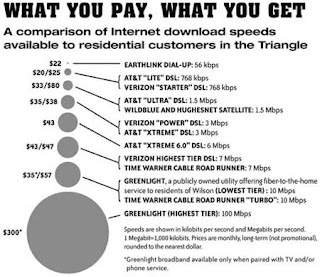 "So what is TWC doing about this--improving its service, dropping prices and offering great incentives to tempt customers back into the fold? Nope, the company is lobbying the North Carolina senate to outlaw community ISPs on the grounds that it can't compete."

It's the same thing that BellSouth and Comcast did in Lafayette. Look at the number of states - Florida included - that have anti-muni laws HERE.

So instead of improving customer service or spending the lobbying millions on network upgrades, they buy politicians like NC state Senator David Hoyle (D-Gaston). [And before you start the Dem vs Rep debate, they own pols on both sides. Politicians only use bi-partisonship to keep the voters muddled and confused why they create another corporate loophole or largess at the expense of the taxpayer and consumer.]

Let's not forget that we are spending $7.2 Billion federal tax dollars on broadband (minus the $602M that was just yanked from that budget). And we have states that WANT -- actually need -- broadband networks built but the Duopoly doesn't like or want competition nor to do what is needed. Broadband is a utility for economics and learning today. Depriving an area from having it is like shutting off electricity.

BTW, I'm not backing Muni networks. I am opposed to the Duopoly of cablecos and ILECs creating laws that benefit only them, like Un-regulation that they bought and paid for in 2004-2006. Your state Public Utility Commission probably doesn't even regulate POTS service any more. Thank your politicians. The same idiots that you keep re-electing every term.